The morning started out cool and cloudy. We had a long decent before we started to climb. Bruce missed the first turn on the descent and added about 20 minutes and 5k to his day. We began climbing into the town of Isnos. We stopped at a bakery to have coffee and donuts before we continued, we had 40k of gravel road planned for the day. My allergies attacked with a vengeance and I was not sure I could complete the day.

The gravel road was in a Purcae Nation Park.  Even though we were at high elevation there was lush vegetation lining the road so there were not many views along the climb.

The park is home to two endangered animals, a tapir and the spectacle bear, I sadly did not see either.

Even though I could barely breath, I enjoyed the rocky ascent. 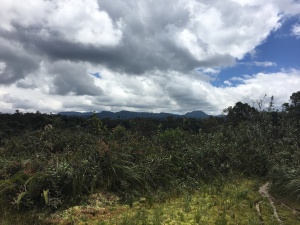 Concentrating on traversing the gravel gave me something to do other than worry about allergy relief.

Even though the road is gravel it is still a highway, so buses, semi trucks, cars still drove through the park. Around kilometer 70 several big trucks were parked along the road. I weaved around them and then a massive semi was trying to drive up a sharp turn. I jump on the bank with my bike to avoid being crushed.

As I continued down the hill, I noticed more busses and trucks parked along the road. The drivers saw me and waved me on encouragingly. I started up the hill and it was insane chaos! One semi had almost over turned on the mud and people were trying to get the truck out of the mud. There had to be at least 30 vehicles stopped for this it. As usual, everyone waved and cheered me on. If only all traffic jams were this easy to move through!

Once out of the tree lined road, it opened up to a beautiful valley. I did not get pictures because I was trying to hurry off the gravel section for relief on my saddle and hands. Around kilometer 85 it became smooth concrete. I was blown away by the lush landscapes that towered over.

I had ridden into another faming community. The sun was starting to set and made the landscape almost surreal. Once I approached the epic decent for the day, about 20 km, I did not take a picture of the stunning green mountains, I was enjoying the decent way too much!

As I approached camp, I knew there was another 4k climb. Even though the day’s ride took me 11 hours, I was happy I found inner strength to finish.

The day was pretty chilly and overcast. Our camp was at a hot spring which was a rejuvenating way to the end the day.

This was presumed an “easy” day for this section. We had less climbing and significant down hill on the route.  the morning started very cold, 3 degrees C/37 F. Since we began with a long decent everyone bundled up for the impending blast of cold air.

We rode through a busy town, Popayon.

Its was a beautiful down with Spanish colonial buildings. The plaza was stunning with mature tress.

The traffic was insane since it was 8:00 AM, the start of rush hour.

We stopped at a Panaderia/bakery to join  few of our fellow riders  who were already enjoying pastries and coffee. The Colombian Panaderias are excellent for taking a break. They have cases of baked breads and pastries, and a large glass case with beautifully decorated cakes to entice you. 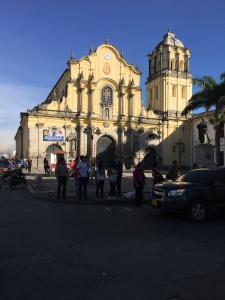 To be honest the baked goods are usually dry and crumbly, and I’m usually disappointed, but it has not stopped me from trying each new pastry. There are tables and chairs on a covered patio to relax before continuing on the ride.

Our ride turned into Colombian rollers than a long descent where the weather became very hot and dry. We’ve been in Colombia long enough now that I can almost figure out what elevation we are at by the vegetation!

We rolled into camp early evening, since we took many breaks. I was ecstatic that camp was in a shaded area with a pool! Bruce and I did opt for a room with a fan rather then setting up a tent.

Did not want to ride today. Saddle sores, exhaustion, and impeding climbing, ugh! The morning started much cooler than anticipated. We had an easy 30k of shaded flat road before we started climbing. Bruce and I stopped for a titino/small coffee at a roadside restaurant/house before the climb and separating for the day.

The first climb was 5k long and gaining 500m/1500ft of elevation gain.

Cloud cover and cooler temps were my saving grace for the day, and as I crested the top the views were amazing! there was just enough sun peaking through the clouds to illuminate the landscape. I rode for 30k along a ridgeline, and amazed by the views.

After lunch we had a 22k/13mi climb gaining 1000m/3000ft of elevation. I took many breaks and stopped in bakeries with a couple of the other riders. 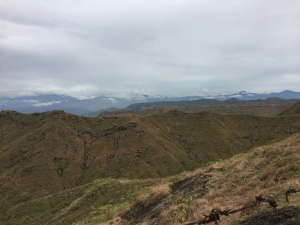 riding among the clouds

I committed a triathlete sin and listened to music on the climb which really helped my mood and energy!

I was surprised how great I felt after the climb! Must be getting stronger! The camp for the night was at a finca of a family. We camped in a field of lush grass that felt like an extra layer of bedding. The abuela was so sweet and welcoming, she went out and picked a whole tub of blackberries that we enjoyed for breakfast in the morning. I wish we could have stayed longer.

Bruce did the climbs ahead of me.  When I got into camp I found out that he got bit by a dog in a small town called La Union.  There are many dogs on the street that in Colombia and most of them are used to cyclists and don’t give you a second look.  The dog that bit him looked to be a pet that wouldn’t cause any harm, but when he got beside it it lashed out and bit his leg as he was riding past.

It opened up a gash about an inch long on his leg.  Our tour medic and support team were excellent and they got him patched up and ready to ride again.

Heading into a rest day, but we had to work for it today! Started with a 4k climb out of camp then a long descent into a canyon My hydraulic brake pads were wearing thin so I was being super cautious. 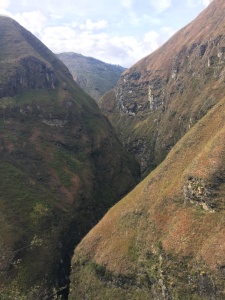 bottom of the canyo

At the bottom of the canyon, we approached a bridge with amazing views. However, I looked up the other side of the bridge and could see what was in my future.

The climb wasn’t actually that bad, and it was amazing to look down and see what I had accomplished. I did take significantly fewer breaks and pushed through small towns. I do think I pushed too hard, I started to crash. I could barely sit on my saddle and I hit a breaking point with the cat calls from locals. I have listened to locals every single day call me pet names, profess their love to me and gawk.

I am over it! I will not marry you, I will not call you and I know my ass looks great! I just want to ride my bike.

By time I got to lunch, I decided to ride the SAG truck to the hotel. Done.

After lunch the climbs and roads were steep. The wind picked up and other riders commented about descending into Pasto, fearing of falling to their deaths from the wind knocking them off balance.

church next to the hotel

Pasto is called the “secret city” because its tucked into the mountains yet it is a affluent city. The down side was our rest day was on Sunday and almost everything was closed for the day.