The ride from lunch to camp was mostly climbing, but not at a very steep grade. However, the little towns did not have any options to stop for a Coke or snack. Everything was closed, another holiday?

The weather had turned cool and drizzly. Another rider had mentioned that the church was a $10 cab ride from camp,

so Bruce suggested that we ride to camp to change into warm and dry clothes rather than riding straight to the church.

A couple of riders accompanied us to the church. The road was a curvy and a steep decent to the town of Las Lajas.

In hind site, I am glad we did not ride our bikes,

it would have been a difficult ride back to camp and there weren’t really any places to lock bikes.

The church was a stunning architectural site. Beautiful details and views.

There was a service starting when we arrived, 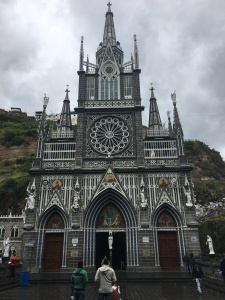 and I felt disruptive walking in to take pictures, but everyone else was doing it, so that makes it ok, right?

After returning to camp, we enjoyed our last night in Columbia.  It is hard to believe that we have already been riding for a month.

Hello Ecuador! Our camp was about 400m from the border.  We rode down around 6:30am.

The tour leader wanted both tour vehicles to go through before riders in case anyone decided they needed to be searched.

The process was not difficult, but a couple of tour busses had unloaded just before we arrived on bike so it ended up taking around 3 hours before we could begin riding! However, it is an exciting achievement to cross an international border via bicycle.

When we did finally start our ride, it was interesting to see the instant differences between Colombia and Ecuador:  a significant decrease in motorbikes,  The towns had traffic lights that people obeyed, there were usable sidewalks, the vegetation was slightly different. 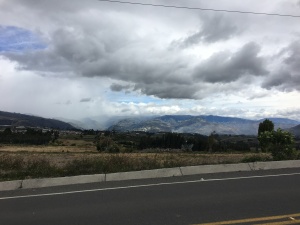 I started to notice different wild flowers and we had entered in dairy country, so more fields with actual dairy processing plants. I have noticed that Ecuador seems to be more affluent then Colombia. There are legitimate factories and plants for jobs.

Ecuador has strong US trade relations and it is much more Americanized. Ecuador uses the US dollar as currency which makes it easier for us, however prices are much more expensive than Colombia.

We stayed in a hostel for the night close to the town plaza. After dinner Bruce and I walked to the plaza and as usual there was a beautiful church and gardens, but there were some interesting sculptures in the gardens. In fact every town has had interesting sculptures relating to the history and culture of the town. It makes for an amusing ride.

The morning started cold and rainy, and a long descent was planned for early in the day. We had a short uphill then a 27k/16mi descent, then up again. The day started with lush farm land then we rode down to the desert. The bugs were horrific, you could not stop for 30 seconds without being eaten alive. I did not remember the elevation profile accurately, so the gentle uphill then steep windy uphill gave me anxiety that I had missed a turn and was wasting energy. And of course those constant saddle sores!

Once at the top of the climb, there was a city dump which smelled amazing!

A dog was 20 meters away in the dump and decided I looked like a threat and chased me down aggressively. I squirt water in his face a few times which did nothing. Finally, I kicked into high gear to out run him, which worked but then I began to hyperventilate because we are at altitude. I hope bad things for that dog’s future.

After lunch we passed through a large city, which was busy and not much to report back on. After that town we turned off the highway and immediately went through a smaller town. The streets with lined with antique shops, artist studios, and more sculptures. I want to to stop and buy all the things, but we have limited storage space.

The further up the gentle climb, the more rural it became. We had entered indigenous areas where native tribes live. You can tell by everyone having really long black hair, usually in a braid. The women wore long skirts, ponchos and black fedora the hats. The women also carried their children in a wrap on their backs.

Our camp for the night was at a hippie hostel just outside of Otavalo. The bus had set up dinner in the back half of the property and the first thing I noticed when arriving was the stone ceremony globe for Iowasaca ceremonies. There was also a guy singing and drumming going on somewhere close by. We set up our tents in a lush green space in a ravine next to a creek. The rooms where on the opposite side of the Ravine. It was very relaxing!

Otavalo is famous for the market place where alpaca clothing is sold. We stopped by for some shopping and picked up gloves, a scarf, and a blanket for home. The materials are so soft and vibrant colors. Around the shopping square is packed with more shops, cafes, and restaurant. Bruce and I stopped for a chocolate cake and coffee at one of the bakeries, it was worth it!

Busy and long day into a rest day!

I planned  to stop riding at lunch and catch the truck to the hotel to relieve saddle sores. Today is the day we crossed the equator!

We stopped at the geographically correct equator not the the Tourist spot “middle earth”. At the “real equator” we learned that the reason the equator in Ecuador is unique is because of the moutains. The indigenous people were able to determine nearly the exact location of the equator by using the mountains as landmarks.  Other countries that are on the equator are mostly rain forests or deserts, without the points on the horizon to reference.

The riding was not difficult except for the insane winds!

In Colombia we would ride up and over mountains almost daily, but in Ecuador the mountains are HUGE and we only ride maybe 1/3 up the mountain making the roads less steep. However, I am sure this is not the case for the rest of our time in Ecuador.

Bruce and I definitely had our fill of coffee and cocoa! I believe we purchased 9 chocolate bars of varying flavors from 2 different shops. That should hold us our for a couple of days!

The old city was beautiful.

We did stop at the epic basilica, which was stunning. It is Independence Day in Quito so a lot of shops were closed but the plazas in Old town were hopping! 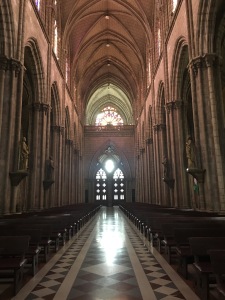 Later in the evening we joined several other riders for dinner and witnessed the festivities in the plazas. The city puts on a light show on the sides of buildings. It is interesting because each “show” illustrates a story paired with music. I was amazed that the streets were packed with locals that I am not sure where everyone was earlier in the day.