¡Estamos aquí! We are here!

When we walked off the plane at the Cartagena Airport we were greeted with a blast of hot and humid air. The walkway was line with lush pergolas overhead and bright smiles from airline workers. We were ushered into the dreaded customs lines, which surprisingly only took 40 minutes. Once we got to baggage claim, our bike boxes and bags were corralled together by a baggage handler that was eagerly looking for us. He spoke very little English but was very useful on getting us through security and to our transfer van to the hotel.

We stayed at the Hotel Caribe. It is a historic hotel across from the beach in Cartagena. Its a lovely hotel with the usual amenities. The best part was the small “zoo” on the grounds. (notice the back side of a sloth on the lower right pic!!!!) 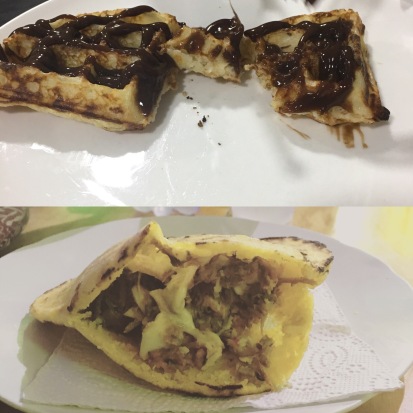 The first night, we walked down a busy street to enjoy some local foods for dinner. Most of the restaurants have outdoor patios, and a server will stand outside to encourage you to eat at their restaurant. We opted for Arepas Pues, for a corn tortilla stuffed meat and cheese. It was delicious. We walked and explored the early night life then circled back to the same street for dessert waffles at Mr. Crepe.

After almost 12 fantastic hours of sleep, we walked along the beach for 2 miles to the historic walled city. I don’t recommend walking, it’s hot as balls and the beach peddlers are annoying and don’t take no for an answer. But you do get to see some interesting people. Apparently, Cartagena is always hot and humid, especially in the summer. Bruce found an interesting graph that explains the local climate.

When we reached the historic city center it was like stepping back in time. The Old City is surrounded by a wall to protect the more wealthy residents from invasions a few hundred years ago. I witnessed an older woman on a balcony lower a basket on a rope  to a fresh fruit peddler to receive her fruit. There are also numerous high end boutiques and jewelry shops within the area.

We are definitely adjusting to using a new language that we do not really know. Going to restaurants and purchasing items in Spanish has been challenging, but exciting. I love learning new cultures and being forced to use a language is the best way to learn!

Bruce and I spent months researching and preparing for the expedition, but the one thing we failed to research was currency. We we told that American dollars are excepted everywhere, but we realized that we would be over paying for everything so we decided to exchange some monies since we will be in Colombia for over a month. Once given the new currency, we were at a loss on what it meant!?!? The bills were in mil and it took a while for us to realize that meant thousands.  It is still a shock to see a price for $20,000, which is about $6.50 USD.

Taxi cabs are abundant and easy to find for transportation, but we were told you need to haggle with the drivers.  With the language barrier, we decided to use UBER when its available.

Cartagena offers an abundance of day trips to small islands, volcanoes, bus tours, etc. We chose to stay in town since we will be riding through so many amazing places. Plus, we had organization meet ups for our tour group.

We are finally fully packed and itching to start riding tomorrow on Sunday, July 9th!!!!