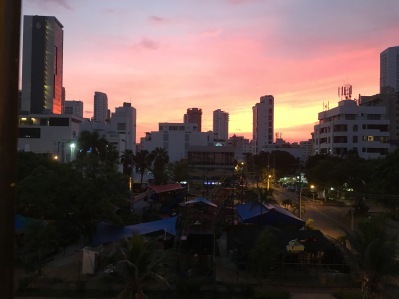 We left Cartagena at 6:30 am, rode in a large group throughout the city for the first 20k because drivers are crazy in the city and its our first day.  Once out of the city and industrial parks we quickly approached rural Columbia: Beautiful rolling pastures, cowboys, livestock, less traffic. I was immediately surprised that vehicle drivers are very courteous of cyclists. I later realized that it is very common to walk, ride your horse, or push a wheelbarrow along the highway as well. Our group constantly receives perplexed looks from locals, wondering why all these white people are riding their bikes here. 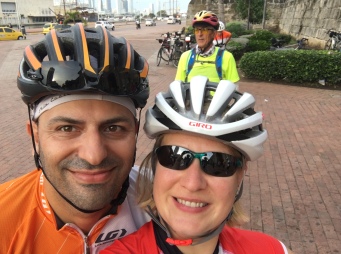 We passed groups of Columbian cyclists going in opposite directions, and usually yelled greetings and a thumbs up. In Ohio we do the same except you just put your hand out and maybe a nod.

Our ride continued along the highway through numerous villages. They were comprised of mud huts, wood huts, or in some areas cinder block. each village usually had a bar and restaurant that blasted music. Colombians seem to always listen to music. I did find it hilarious that a mud hut would often have a satellite dish attached to the roof.

In each village there were dozens of stray dogs. I was delighted that the dogs were everywhere and that the locals will feed the dogs scraps, they are not vicious attackers as we were previously told. However, the dogs will sleep along the side of the road, waiting for a passerby to give them a snack. which results in a lot of roadkill, which I probably won’t get used to. I want to love on each pupper, but they are dirty, covered in fleas, and are not wormed and I need to lookout for my health on this expedition.

While passing through villages you see everyone hanging around outside. Communal gatherings seem to be the only form of entertainment; everyone sits outside and watches the day go by. Rarely do you see someone eating or drinking alone. As the day wears on the music gets louder and more people join the party.

The wort part of the day was extreme heat and humidity. I don’t do well in humidity in the first place, so today was excruciating. I believe temps reached 90 degrees and humidity was at least 80 %. And no wind…

Our first camp was at a Finca, or small farm. Everyone set up tents in a space about 20 feet wide between the house and chicken pen. Bruce and I opted for the front yard, for more space.

The owner of the farm was a very sweet woman who seems to be an entrepreneur as well, people were coming in and out of the house all day long, sometimes with receipts. Also, a group of kids climbed a tree and were harvesting the fruit, Mamoncillo. We got to try some, its was delicious! Just squeeze the skin until it pops then you suck out the flesh around the pit, it has the texture a ripe peach, and had a light and sweet flavor. I now understand why EVERYONE was purchasing and eating them around Cartagena.

The Finca had 1 toilet and shower for the 20 of us to use. The toilet was porcelain and plumbed to the ground, but did not have running water or a seat. There was a 50 gallon bin filled with water and a bucket, you had to pour water into the toilet to “flush”. The same bin of water was used to “shower”, the idea was to pour the bucket over your head, later up, then rinse. I had flashbacks of being bathed as a toddler.

I regrettably did not get any pictures of the Finca because I was battling heat exhaustion and just trying to cool down and get through the steamy night.

After barely any sleep due to the heat, loud music from the bar down the street, and truckers on the highway we got our gear ready and head out for the day. I was better hydrated and ready to see the next stage. 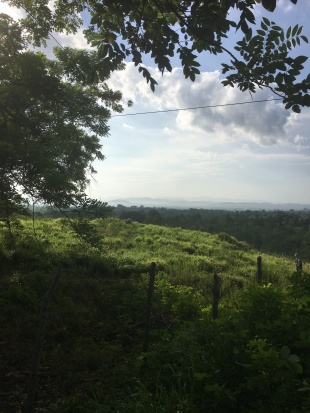 We rode through more rolling hills and villages. We also came through beautiful tree lined roads along ranches and beautiful haciendas. I was glad to have a reprieve from the constant sun. The trees were all so old and beautiful.

Motorcycles are more common than cars here. It is not unusual to see 2 guys on a bike together. Farm hands used them so it would be 2 guys and buckets, or shovels, machetes, etc. Families piling on one motorcycle, I have seen up to 2 adults and 3 children under the age of 4. It is comical and amazing the balancing act that is performed.

When we arrive in our destination town, Tolu, we were kind of confused as to where exactly we were going. We made one correct turn then accidentally passed the other. We heard shouting and whistled, but ignored them.  A guy on a scooter chased us down and motioned for us to turn around, once back to the proper turn a group of guys shouted and made gestures to the correct direction. They were very helpful! I guess when you have nothing else going on and hang out on the same corner you notice when 15 strange cyclist go the same direction.

Our camp for the night was at restaurant and camp ground across the road from the beach. The restaurant owned a bar and several grass roofed tables on the beach. I could not wait to don my swim suit and go for a dip in the Caribbean Sea. The water was warm, but we found some occasional cool pocket and it was glorious. While drying off we hung out under a hut and sipped cold Coronas and enjoyed some fresh shrimp ceviche. 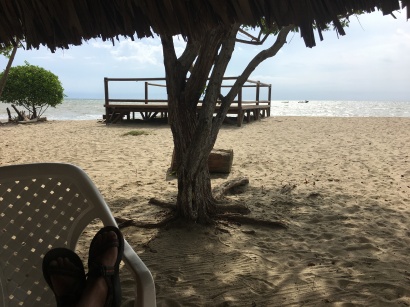 Bruce and I spent the afternoon on the beach reading and sleeping in hammocks. The ocean breeze was refreshing after spending the last several days in humidity. We were excited to have the ocean breeze in our tent that night, but the fence and restaurant blocked the breeze and we spent another night in stagnant air and humidity.

An early morning rain storm cooled temperatures significantly. Once on the road another downpour happened for about 30 minutes after riding 20k, It was refreshing but created a lot of chaffing later.

Today we finally started to climb some hills. Bruce and I were happy to finally get to work our legs on hills rather than flat roads with gentle rollers. We started to pass through some larger towns and rode mostly on highways for half the day. After several kilometers of large rolling hills we finally came to a huge hill switch backing along side a mountain. Once we approached it I noticed cars coming down and knew that climbing it was in my future, It ended up being 2k of climbing at a gentle grade. Bruce did get a pic from the top 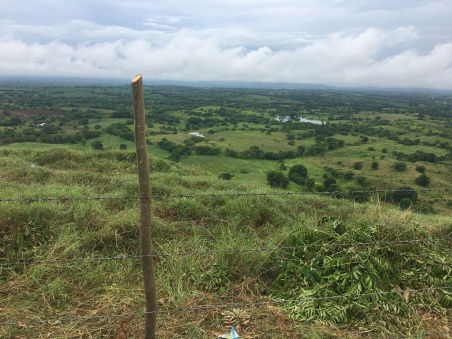 At the top was a very busy city, Sincelejo. We had to traverse the roads with semis, cars, vans, motorcycles, and other cyclists, as well as food cart vendors, and wheel borrows. Chaos. I feel like I’m going to become very comfortable riding in traffic after this tour.

The next town we entered was not nearly as busy but we did have trouble finding one turn, a man selling tea along side the road yelled after us and helped us to the right street. So far, Colombians have been very helpful! Later, the tour director said when she is placing guide steamers to mark our turns, people ask what she is doing and the locals help us out because it is something new and interesting.

After that little town we went onto a freshly paved country road with little traffic and beautiful farms on either side of the road. It was so peaceful and other riders agreed that we could have ridden on that road all day, but all good things come to an end and we turned off that smooth tarmac for our first dirt road! 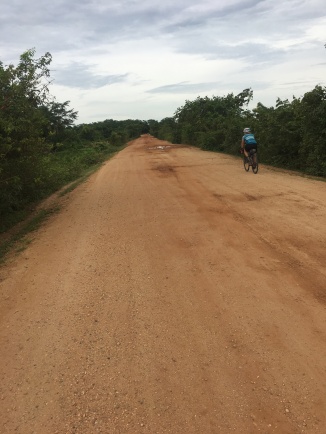 There were lots of bumps and divots. Bruce and I were excited to get off road since this IS an epic adventure. This dirt road took us through even more small villages, and we received even more perplexed stares. When a group stared us down I shouted “Buenas” and a chorus of salutations erupted in reply.

From the previous night’s rain, some sections were very muddy and we heard from other riders that more rain passed through while they were riding and they had to walk their bike because the road became impassable.

When we finally arrived in San Marcos after about 50k of dirt roads, we were pleasantly surprised of the bustling town. The tour or myself could not find any info on the town. From what we have seen is that it is the only town in the rural area and its a popular place to stock up on beauty supplies, fabric, hardware, bike repair, farm equipment, appliances, etc. This place does not have any tourism. We were probably the first non Colombians in a very long time to be in the city. I love being able to experience a city without being hassled to buy something, it was a first look at rural Colombian life. 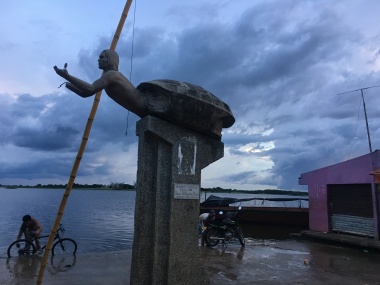 After we settled into our rooms several of us took a walk to get groceries and other items. We walked to the river and found a very interesting statue of a turtle man.  This is the “Hombre Hicotea” of San Marcos.  It symbolizes the amphibious nature of the people here, living off both the land and the water.

A park was 2 blocks from the hotel and it was buzzing with activity and food carts, we chose an arepa de chocolo, stuffed with cheese. The man serving was very sweet and trying to ask us what we were doing in town, we think were able to give him an idea of our trip in broken Spanish, but we can’t be sure. 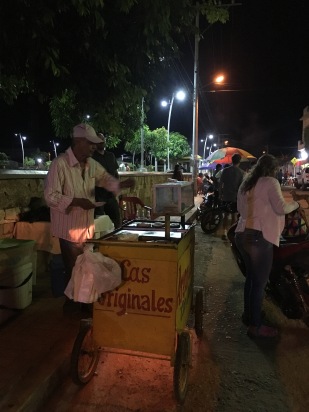 I have learned that when you greet someone in Spanish they rightly assume that you speak fluent Spanish and ask you a bunch of questions or make small talk, I then have to reply that I do not know Spanish very well. Must get better at listening and translating.

I feel at ease everywhere we have been, and am grateful that we are getting to see the “undiscovered” parts of Colombia.