I decided not to ride today to give my saddle sores another day  of rest. I rode the bus and talked food with the tour chef.

6:30am on a Saturday of a holiday weekend made for an easy ride out of Quito. The ride was basically a long ascent then a long descent. The ascent went up to 4000m/13000 ft. The highest Bruce and I have been. 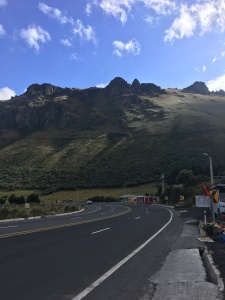 Bruce mentioned he was feeling the affects of altitude at the high point of his ride. After the summit it was a long descent into camp. The road was a highway with a bike lane that was usually covered in debris and would switch to different sides of the road via a tunnel.

The weather was cool and rainy with lots of fog. Our camp was at another hot springs, which was very busy with families. The shop in front of the springs had ample pool floats and swim suits. In the US kids are not generally allowed in hot tubs, but in South America they are used as a public pool. Most of the riders thoroughly enjoyed the hot springs. I did not because I was cold and did not want to take a cold shower before and after like the last hot springs.

Since I had ample time on my hands, I assisted the tour chef with prepping dinner. He mentioned he wanted to make gumbo and since it is one of my specialties I offered to make the roux. He had never made a dark roux before and that is the key to a good gumbo. It felt good to shake the dust off my cooking skills. The chef asked if I would ride the bus the next day too, but I am here to ride my bike!

The day began cold and dreary yet we were descending all day into the heat. It was deja vu from the last time we stayed at a hot springs.

We started our descent and the fog was starting to lift so everyone would stop to take pictures.

Towards the end of the first decent, Bruce and I met for a cup of coffee then continued on for 20k to lunch. We enjoyed rolling hills long the river and the scenery reminded us of West Virginia and Tennessee. Rounded green mountains and gently rolling roads.

We finally spotted our first wild animal! A little red brocket, we were going too fast and the little guy scampered off too quickly for a photo.

After lunch we began a gentle incline before we descended into camp. The wether was becoming very thick with humidity and road signs for the Amazon Rainforest were everywhere. 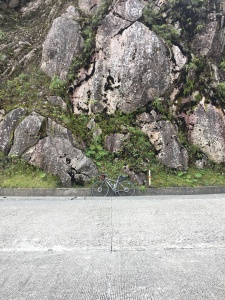 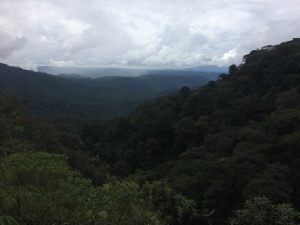 At the summit of the climb I had expected beautiful views but the fog was so thick you couldn’t see anything. The lower we descended the less clouds but the warmer it became.

Our camp for the night was at a hostel with pool and a few rooms. Bruce got us a room because it had air conditioning, and I am glad we had room because it stormed off and on all night.

Rolling hills into a rest day. The morning started foggy and muggy.

We rode across the Naruda River, which runs into the Amazon River. We had views of snow capped mountains and volcanos.

The one climb for the day was steep but short, 5k of climbing and 500m of elevation.

I was dripping in sweat and had to stop once because I had too much sweat dripping into my eyes. At the top we had lunch and then it was rolling hills to our hotel. We are in the rainforest so its hot and humid, yay.

The dogs have become ruthless attackers. Everyday, multiple times we are chased by angry dogs. After Bruce’s bite incident, we are becoming more cautious. Bruce has actually caught himself talking smack to a dog after it walks away.

Puyo is a busy town with several animal sanctuaries and other touristy places. We are opting for a legit day of rest by the pool then hibernating in our room during the the afternoon.