We must be getting stronger because today was not a difficult riding day. Mostly rolling hills with a climb after lunch, but we made it through. We rode along highway 45 or the Troncal Amazonia.

At about 25k there was a look out point, Mirador. 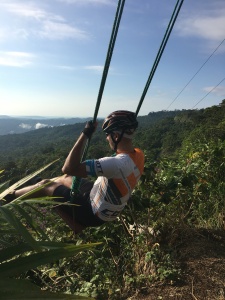 It cost $.50 per person but they had a swing that went over the cliff! I was scared to go very high and Bruce was not wanting to take a turn until he caved with peer pressure. 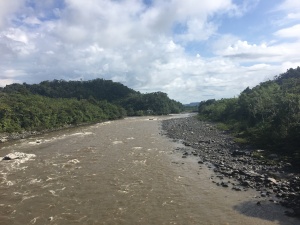 I was surprised how many locals would stop and check out he rive and bridge while we were eating our lunch.

When we started to climb, I was not wanting to continue. it became very hot and humid right after lunch. My saddle hurt, I couldn’t breathe and my legs were screaming. There were very few towns along the way to stop for a cold Coke. I endured with several Chade breaks.

We noticed several dead animals along the road today. 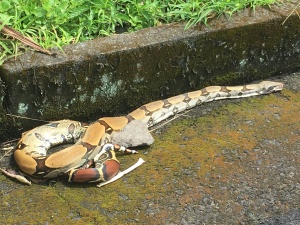 One was a massive python, which I was relieved that it was dead. I do NOT want to come across a live one, even if aBruce assures me that they will not harm me.

Once we about 20k from Macas, I noticed that the houses becoming huge and very modern and many upscale hotels. Macas is a popular town for Amazon communities to resupply and sell items.

Our hostel of rthe night was very nice. There was a large grass hut that fit several of our tents and protected us for the intermittent downpours throughout the night. There was also a breezy game room with hammocks surrounding a ping pong table which made for a cozy spot to watch fellow riders play ping pong. Which I am always shocked to see the game, I am more familiar with beer pong…

Another “easy day” of rollers and rainforest. 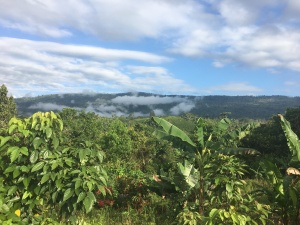 Another hot day and a doable climb after lunch.

Dogs are definitely ready to chase and guard their homes. After Bruce’s attack, we are both more cautious. After screaming “NO” and surging power to flee the little jerks I can only assume our Strava accounts look like a jagged spurts of power every hour. Its like interval training!

I enjoy the early mornings most of our rides.

Its quiet and the clouds hover low in then green mountains, like they are wiping the sleep from their eyes before getting out of bed.

The butterflies in the South America have been beautiful. They are huge by comparison to Columbus and their colors are bright and vivid. I feel bad if I run into one while riding.

Our camp for the night was at a small town’s fairgrounds. We set up tents under a large pavilion in the seemingly unused park.

However, locals walked around throughout the evening to inspect our presence and to get in a workout of stairs. The toilets were disgusting and barely flushed. No showers available so we had to restore to the ol’ bucket wash.

I can easily go a week not showering while backpacking but for some reason while riding my bike I feel like a need a shower everyday.

Overnight we had several intermittent downpours again and I was very thankful for the pavilion to sleep under.

Three big mountain passes to go up and over today then it was all down hill into camp. Each climb was about 15k/9mi long and 600m/1800 ft of elevation gain.

The first ascent started right away. The views were beautiful since the sun was peaking through the clouds. It was steep and I could not breathe, these allergies are ruthless.

I will never get used to being close to the top of a climb and see a car com down the mountain from the top and think to myself “oh god, I have to go up there?!??”

The descent was beautiful. 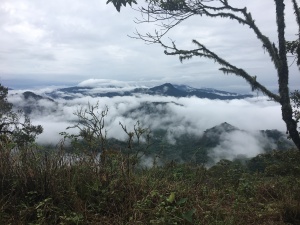 We were high above the clouds and the views were astounding. It was a fast and curvy descent, I went slower than usual because the views were breath taking.

The second ascent was a bit longer and steeper and I knew lunch would be at the top of the climb so that was encouraging. 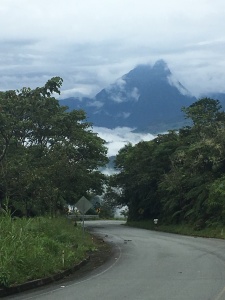 It started to get windy and rainy, I don’t normally mind a bit of rain while climbing, it helps keep me cool.

After lunch I lacked motivation to continue. I was tired, I couldn’t breathe well, and frustrated the my body is not performing on this trip like I know it can. I told myself over the last 50k it was downhill then 15k of work then down hill into camp.

I have noticed that most small towns are not as social in Ecuador than Colombia.

Its hard to know if a shop is open. I wonder if it has to do with the larger job force in Ecuador, everyone is at work rather than hanging out with nothing to do.

Our camp was at a public camp ground next to the river. A restaurant was in the same space which made post ride beers convenient. We were able to camp once again under a grass pavilion to protect from the rain.

A legit easy day!!!! Easy rolling hills through the river side plates of the mountains. 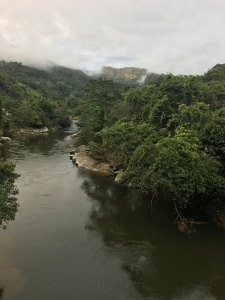 The scenery and lush vegetation were beautiful and we rode through many small towns that actually had shops open. Bruce tended on his phone for music and was singing along during most of our ride.

This day was the worst day for allergies and breathing. I started having an asthma attack which I have not had issues with in a couple of years.

At lunch Bruce found a pharmacy and bought an inhaler for me. No need for a prescription here and it was less than $20! I felt instant relief after using the inhaler even if all the symptoms had not subsided.

We finished our ride before noon and had the afternoon to laze about the riverside resort that had a pool and multiple grass roofed pavilions. We opted for a room so I would have to camp in the grass, my allergic trigger.

After starting my new medicinal regiment to breathe I was significantly better and actually went faster than usual. I was not 100% throughout the day, but its progress.

I stopped in a busy town for a Coke before the climb began. I had a sweet little audience while I ate my peanut butter sandwich, he was a little black Shar-Pei looking pupper. I gave him a corner of my sandwich which he ran away with and then came back for more a few minutes later. A jovial family came by the shop while waiting for taxis. The two men each purchased a bottle of beer, at 8:45 on a Sunday!

As they chatted one of the men walked across the street to the military base and handed his beer through the fence to the guard, who then took two sips before returning it. The wives and children were loaded into one cab and the two men waited a minute longer for another cab and they were off with beers in hand. Loja is having a massive celebration for the Catholic Church and I believe everyone was excited for the festivities, there was also more traffic along the roads towards Loja.

At my next Coke stop halfway through the climb, A man and his daughters sat down with me and asked about the bike riders. 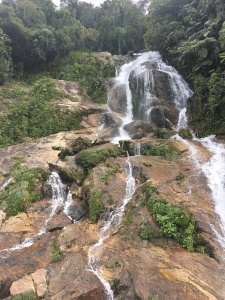 They had seen a few others along the ride. He asked if I was going to the festival in Loja. I am glad that I am able to talk with the locals finally. Â Even though the Ecuadorians have not been as visible, those we have met have been very polite and welcoming.

The last 20k of the climb was in The Podocarups Nation Park. I was happy to be gaining altitude and seeing pine trees again. The road was very curvy and it was the type of road where you could see cars coming from way up the mountain when you are still riding a few kilometers away.

As I approached the final summit, storm clouds started to roll in, the wind picked up and I could hear thunder in the distance. 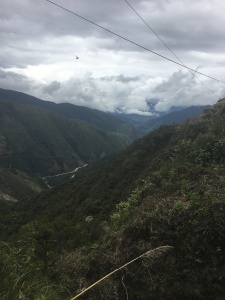 I just “love” descending in the wind and rain! The descent was about 20k long with lots of switchbacks. The closer I got to Loja the more people I saw walking towards the center city. This festival must be a big deal.

I managed to ride the whole day and even completed each day of this section without riding the SAG truck. I definitely feel like I am getting stronger and getting used to the climbing. Its amazing how the body adapts.