The roads are overrun with motor taxis, vans packed with passengers, cars, and semi trucks. Intersections are an organized chaos of vehicles following traffic lights and those trying to run over pedestrians so they can get where they need to be. There are many shops and restaurants, but nothing above average. It’s just another city.  The major attraction is Museo Tumbas Reales de Sipan, a museum about a pre-Incan civilization, Mochica that was discovered in the early 1980’s.

The locals are very proud of their new found heritage. The cab driver on the way to the museum showed us a video on his phone explaining the civilization.

The museum was massive and built like the temples that were once prominent in the area, strikingly similar to Egyptian civilization. Until the 80’s most tombs found in the area were robbed before archeologists had a chance to study them.  When items from this tomb showed up on the black market the authorities took over and soon after archeologists discovered the temples hidden as mountains after thousands of years in the Peruvian dessert. They unveiled multiple layers of tombs with treasures and bodies. The museum has an impressive collection of these treasures from jewelry to pottery, and the actual bones of the deceased.

Our hotel was very upscale and comfortable with a restaurant that was open all day and had high speed internet. We spent most of the time in our room and ate at the hotel restaurant. Our rest day was on a another Sunday so very few options around town were open.

Wheels in motion at 7am, much later than we have been due to the sun rising later. It’s nice to sleep in a bit longer but the roads are busier at 7 am rather than 6:30 am. As we left the downtown area the roads were lined with industrial plants, dirt roads, and trash. The traffic eventually thinned out as we entered the long flat stretch of highway through the dessert. 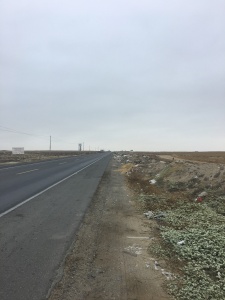 The road was lined by heaps of garbage and broken dreams. So many advertisements for development of homes, condos, and businesses. After 15k, a second freshly paved road appeared on the right that no one was using. We jumped at the chance to ride on our own private highway. A few workers had passed us in trucks and no one cared. 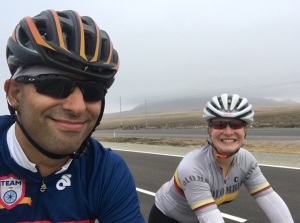 We decide that if the Police stopped us would would exclaim “Ciclovia, muy bien!” (bike lane, it’s very good!) Since the road was flat and no traffic what else do you do but take riding selfies! The trash and building debris did finally dissipate and the private highway continued for over 20k. 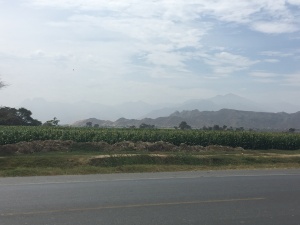 The road continued on the same highway going through towns sporadically. Some where tiny with a few buildings, some were busy with multiple buildings and lots of traffic. The wind picked up significantly throughout the day. At one point our bikes were leaning to the left 15 degrees to stay balanced.

At first glance, Pacasmayo looks like another dirty town with disheveled mud buildings. But the closer we got to the beach it unveiled itself to a bustling modern town with many shops and restaurants.

Our hostel was a block form the beach. Inside the walls of the hostel were lush trees and plants, a few sweet dogs, and surfers. Pacasmayo is a very popular destination for surfers, apparently the beach creates a wave that is 2k long.

We arrived at camp around 1pm so after setting up the tent and showering, Bruce and I took a stroll through the town. We hit up a coffee shop for coffee and cake then walked to the beach and sat on a restaurant patio enjoying a beer and watching the waves.

We did notice a seal swimming and he eventually come onto the beach, flopped around and cried for a minute then went back into the water. I love seeing animals in their natural habitat! It was a great ending and everyone in the tour agreed that this was out rest day not Chiclayo or Trujillo.

We left the beach to go inland onto the highway. Again, passing large manufacturing plants lined with trash. 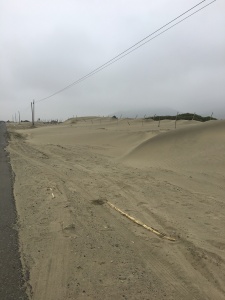 Several kilometers in we were in the desert. Large sand dunes lined the road and you could see forever. Although we are in the desert, a cloud of mist hangs over the land for most of the day. We ran into another unused divided highway and jumped on to have our own private road. However, tourist vans used this road as well, I assume illegally, and drove insane speeds past us. This highway continued for over 25k. At one point we paused and noticed there were absolutely no cars or other people around us on either highway all the way to the horizon on both sides of us. It was very surreal. The headwind was unrelenting and we road at a gradual uphill which drained all my energy. For some reason I was a snotty mess today and constantly hacked and coughed. It is frustrating not be able to ride to my potential and enjoy the day. The desert gave way to lush fields of sugar cane.

We were close to a river and irrigation made growing possible and abundant agricultural sucess. After 65k we left the highway for back country roads to head back to the beach. Although these roads were in worse condition I was thankful for the significantly fewer cars and alleys of sugar cane.

At 95 kilometers the road made its way back to the beach and we had unobstructed views of the ocean for 15 kilometers.

The wind was very strong but the fact that we got to ride our bikes along the Pacific Ocean on a seldom used road is one of the reasons we are on this expedition.

Since I was riding so slow, we decided to catch a ride to the hotel on the SAG truck when it  passed us. Which was around 110k, right before the beach town Huanchaco. A quaint little resort town with endless options for ceviche and beer on the beach. Also another popular surfing destination. I really wish we had stayed here for our rest day rather than Trujillo.

Our hotel in Trujillo is adequate but in a questionable neighborhood. There is not much within 2 blocks of the hotel other than residential buildings and a lot of traffic. However, the Plaza del Armas is just a 15 minute walk away.