This day has been discussed and fretted about by the tour staff since we began the tour.  On the transit to Cartagena with the the tour vehicles one of the staff said that he didn’t see how it was possible for a person to do the climb on a bike. We went from to 500m/1700 ft and ended at 3300m/10800 ft in only 62k/38mi. After traversing the busy streets of Nazca, we quickly started the slow incline.

The town slipped away to rural areas and houses became fewer and fewer. At one farm, a few dogs barked and started to chase me down, I stopped and got off my bike, worried that they would actually bite me. But their tails were wagging and they nudged me for pets and licked my hands. I felt like petting them was only reinforcing their behavior.

The last sign of civilization was at 13k, a shutdown restaurant and farm on the other side of the street. After that, the incline really felt like it had started. I motored along, feeling great and not having any breathing issues. I took breaks to take pictures and to reduce my heart rate. 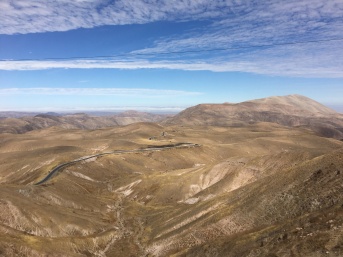 I chugged water and was thankful the bus had passed my and stopped so I could refill water. The thirst sensation never left all day long. After 30k and 2000m elevation I started to get tired. I stopped almost every kilometer for a minute or two to rest. I was blown away by the sprawling scenery and the increasing amount of vegetation as I climbed. So many beautiful flowers, cactus, bushes, and desert grass. The sun was unexpectedly hot, temperatures were in the mid 30C/90F degrees. We were prepared for cooler temps as we climbed. As I approached lunch, I ran through a tiny town run down town of 4 houses and a few dilapidated businesses. I still am amazed at the conditions people will live. Lunch was set up around 45 kilometers. I was exhausted and decided to sit and relax for an hour before returning on the road. 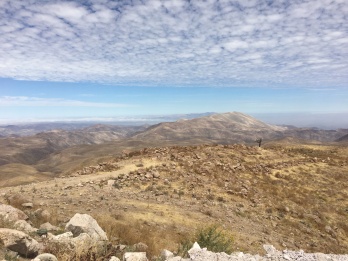 I only had 17 kilometers left of riding and pushed through even though I was starting to get dehydrated. At 53 km, there was another town with a few restaurants, I stopped for a coke and a break in the shade. The lady who worked their asked me the usual, and asked if I was going to Cusco. That seems to be the popular guess for locals when they see a gringo.

I finally reached camp around 3pm. I was tired, sun burnt, dehydrated, and elated that I had finished without major issues. Our camp was set up in a open field between mountains right off the highway. This was our first legit bush camp, no toilets, showers, nothing! It felt like real camping, despite the intermittent semi truck that passed.

I was very dehydrated and had a horrible headache so I went to the tent to stretch and clean up with baby wipes.

The sunset was absolutely beautiful, behind on mountain range it looked like a receding fireball then reflected onto an opposite mountain illuminating it with amber. It was a a rewarding experience for a tough day of riding.

More climbing today, but some long descents to enjoy. The sun was bright and hot already, I was not looking forward to another day of dehydration and sunburn. The first 15k were slow elevation gain and some downhill overlooking valleys of dry grass. We entered a national park, Pompas Gilenas. It is a wildlife reserve for vicuñas a relative of the llama. I kept my eyes peeled for a glimpse of one. The climb into the park was a little steeper than I had anticipated and I was wondering if I would make it through the day.

After entering the park and reaching a high point, I enjoyed a downhill section then “flat” section.

I had almost given up on seeing a llama until after the park museum I noticed a pack in the distance, then another pack on my right just 50 meters away! I stopped to study them for a while. I kept on riding and kept seeing more and more packs. I must have seen over 100 llamas scattered within a few kilometers. A dozen or so even crossed the road in front of me! I noticed that some them had the fur shaved down rather than being fluffy. Apparently their fur is very soft and a desired wool. I continued onto the summit for the day and it opened up to a beautiful view of the Peruvian Andes. 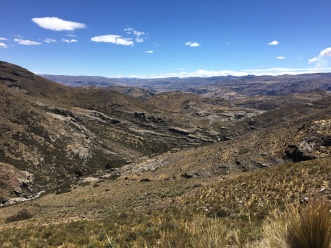 I got to enjoy a winding long descent passing through more beautiful scenery. The further I descended the more trees and vegetation grew. The fragrant, eucalyptus trees were prominent in the area. At the bottom of the descent was a small faming village of indigenous people. The women wear a-line skirts, bolero hats with a colorful wrap to carry crops or children. 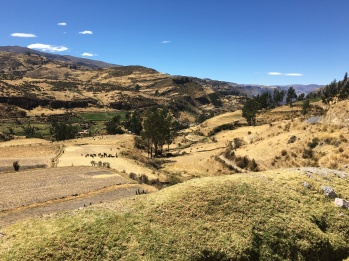 They are usually tending to a herd of livestock as well. I began the climb out of the valley and it became super hot again, I did not think I would be able to withstand the heat. I stopped at a shop in a small town for water and the shop keeper was a quiet timid man with a sweet disposition. After I filled my water bottles and ready to go, he came out asking me questions. A few riders had stopped already and he was excited for us and thought what were doing was great.

Luckily, this second climb had some downhill sections and shade, and the temperatures returned to a reasonable degree. The road curved up and around the mountain, passing through small farms. I waved to several of the farmers and always received a big wave and smile back.

After reaching the final summit it was a long curvy descent into Puquio. I had so much fun rounding the curves and thankful for barely any other vehicles on the road.

Upon first glances of Puquio, it seems like a large town for the middle of nowhere, with dirt roads and shacks. But as I got closer to the center of town it was a bustling trading center with people everywhere and ample shops for clothes, electronics, and beauty supplies. However, grocery stores were scarce, plenty of fruit stands and bodegas though.

We have a rest day here to acclimatize to the elevation, and its going to be an authentic experience in the Peruvian Andes.