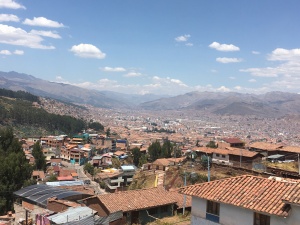 Three whole days in Cusco to rest, but resting is for suckers! My brother, Rob, flew in from Ohio to join us for the next section of cycling. He just started road riding this year and has never been at altitude, YOLO! We spent most of our time in Cusco eating and drinking, like we do at home.

We took a train to Machu Picchu for a day trip. None of us have been on a train so it was a fun experience. The ride was calm and the scenery was beautiful. When we arrived to the town of Machu Picchu, the town was booming with markets, hostels and restaurants.

You can hike to the ruins from the town, but we opted for the bus ride. It was a winding uphill ride. I was amazed that the buses made it up the mountain. There were tour groups everywhere at the entrance.

We opted to not go with a group or guide so we could go our own pace. We started by going up to the Sun Gate, ruins on the top of the mountain. It took us about 45 minutes to go up, stopping to take pictures. At the top it becomes steep and I’ll admit I was a little scared of falling. After enjoying the views for 20 minutes or so, we hiked back down.

We continued around, avoiding tour groups the best we could. Next we hiked out to the Inca Bridge, a very narrow trail towards a very narrow bridge that you can only view because it is not structurally sound. The trail was a long a steep cliff and kind of nerve racking to walk along at points. Next, we walked through the reaming structures of the ruins. Attempting to dodge tour groups and still see everything. It really is fascinating to see the hand cut rocks that are perfectly stacked and still standing. The advanced drainage systems still work after hundreds of years. I was very impressed with the ruins, it was much larger than I ever expected.

We took the Hiram Bingham Train back to Cusco. It is a swanky dinner train that made us feel like we had time traveled to the peak of train travel. We sat at our table and the server brought us sparking wine and took our dinner orders.

Once the train started going we were ushered to the bar car for drinks and live music. The bartenders made sure to get you nicely buzzed before dinner. Dinner was three courses of soup, duck and dessert, and lots of wine. The three of us were so tired after the hike and drinks that were falling asleep at our table. I would highly recommend this experience if you get the chance.

We welcomed three new riders for this section.

One being my brother, Rob! The tour staff arranged to bus everyone 30k out of Cusco up and over a mountain range. We descended into the Sacred Valley, A former Incan civilization and a popular tourist route that has many ruins along the river.

The ride started with gentle rolling flats and beautiful scenery.

The sun was peaking out and we enjoyed moderate temperatures. The river was lined with eucalyptus trees, bushes, and blooming prickly pear cactus. Rob, Bruce and I stopped several times to take pictures and enjoy the views.

The ride consisted of four 100m climbs with multiple rollers.

We rode through several small towns and villages, enjoying rural lives. It was a Sunday and the larger towns were packed with farmers markets. The ladies were dressed in bright and colorful dresses and hats. Numerous fire spits were smoking delicious pig skin, or chicharron.

After lunch, we hit a wall.

We waited anxiously for a Coke stop, which became few and far between. We finally stopped at a run down gas station and enjoyed a warm Coke. That gave us the energy jolt we needed to get through the final 30k of riding.

Our camp was in a field behind a restaurant. Since we were still in the valley, the mountains surrounded us with majestic beauty.

Today is Bruce and my 7th wedding anniversary, I’m glad we get to celebrate it by riding our bikes. The morning started out chilly, but we began climbing as soon as we left camp. It was a gentle increase of elevation for 30k. We road through several towns, one being rather large and busy. After 30k we began the climb up to 4300m at 53k, about 800m of climbing. Bruce motored ahead, which left Rob, a  new guy, Evan, and I to slog out the climb. The more we climbed the less towns we saw. The valley opened up to a golden alpine prairie with many farms and livestock.

The mountains surrounded us, even some snow capped mountains peaked through. Rob managed to find his grove and motored ahead, he’s a beast! Evan and I rode together for the last 15k to the top. It was nice to have company, small talk always makes the time go by faster. After summiting, it was a long downhill for about 8k to lunch. I was freezing at this point, I did not wear or pack enough clothes for the day’s ride. The temperature hovered around 8 degrees Celsius for most of the day. At lunch, the sun began to peak out as we were ready to leave. Bruce, Rob, Evan and I were ready to take on the last 65k of mostly downhill with gentle rollers. After riding only 7k, we rode over railroad tracks and I completely wiped out. I know I landed hard on my head and shoulder. Rob said my back tire slipped out and I fell on my left side then rolled a few times. I heard the crunch of my helmet and was worried that it cracked. Bruce immediately phoned the tour leader to have the medic get us. After laying on the road a few moments, I started to move my appendages one at a time to asses for injury. Luckily nothing seemed too bad. I asked Rob to help me up, and my head did not hurt so I walked to the side of the road. My shoulder hurt and my right arm stung really bad. After the medic arrives, he checked for a concussion, and mobility of my shoulder. Luckily no major issues. My right arm was skinned by road rash and bleeding, I am shocked because I was wearing arm warmers and a jacket! It’s the exact spot of road rash from my previous crash a few weeks ago. Needless to say, I rode the van to camp.

Our camp was actually in a hotel in a busy town. The rooms were clean and our tour chef is still made us dinner. The town is typical with a plaza, a beautiful church and many shops and restaurants.

The staff and other riders surprised us at the rider meeting with a candle lit wedding service\vow renewal and cake. It was hilarious and sweet. We are lucky to be “living with” so many great people!

Throughout the evening, Rob started developing Altitude sickness symptoms. He had a fever, breathing heavy, coughing, and nauseous. He kept getting worse so the tour leader and medic made the decision to drive him to Puno, a lower elevation. The medic put Rob on oxygen and gave him an IV for the ride. Bruce and I decided to go too. We crammed into the truck for the 140k drive which took almost 3 hours. It was scary to see my brother suffering for that long. A large town before Puno was a complete mess of dirt roads and speed bumps. With every bump Rob groaned in pain, he was starting to get car sick on top of all his other symptoms. We ended up taking him to the emergency room in Puno where he was giving IVs, oxygen, and meds. While Rob was being assessed, I slept in the truck, I still had a massive headache from my accident earlier.

After Rob was stabilized, the tour leader took me to the hotel. I slept hard for about 5 hours, and woke up feeling like I was hit by a bus. Bruce stayed with Rob all night at the hospital. Rob was finally released around 9am. He was in good spirits when he got to the hotel, starving and exhausted.

Obviously we did not ride this section. We spent the day resting and recovering. Rob and I are both completely fine and will be continuing with the next section after our rest day.

We did spend the morning of the rest day taking a boat ride to the floating islands in Lake Titicaca. It was a definitely tourist trap but interesting as well. 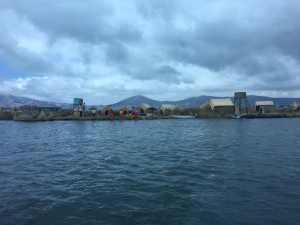 The islands are made of reeds smashed together to make a 4 meter deep island. They build tiny houses and boats out of the reeds as well. 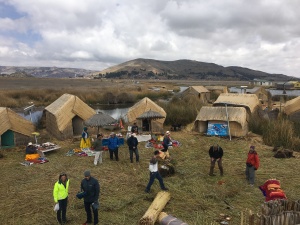 Each island lasts about 25 years and takes about 1 year to build a new one. The islands felt like walking on hay. This is a pre-Incan lifestyle that they still practice today.

They have solar panels for lights and TVs, cell phones, and motor boats for transportation.

They make crafts and do demonstrations of their lives on the islands.