Section 7, part 1: Across the Andes

We were awakened by a thunderstorm and torrential rain around 6am. We could hear the rain pouring into the courtyard just outside our room. We have been very lucky with the weather on this trip, so a soggy morning is a first for us. The rain stopped before we left the hotel, but the rain had flooded the streets and made it slick. Navigating out of Salta was more difficult than entering. The four lane divided highway was busy and the right lane was flooded with water, a nerve racking ride since you never know what is hiding under standing water. After 14k we were out of the city traffic and back on a two lane highway with no shoulder. This highway is called the Ruta del Vino, wine country! We passed through several small towns that actually had open shops and bakeries, it was like we are in Columbia again! The road continued through lush farm lands with massive trees lining the roads. The rain continued off and on for a couple of hours into the ride, luckily it was not heavy and we were still able to see the road. 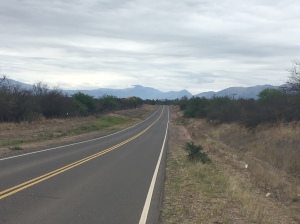 Around 50k I blinked and the terrain transitioned into more dry desert like lands, no grass, flowered bushes and cactus lined the road. A few vineyards had popped up along the highway. Is 9am too early to start drinking wine?

Lunch was set up at 70k and the rain had finally stopped. I didn’t stay long at all because the wind was making my wet clothes very cold. The road began rolling up and down rather than straight flat, which still gets me in the lungs. I think I can fly over the hills because they aren’t 100m tall.

At 96k, it was our last known Coke stop. We did stop and the restaurant actually had a section of wine, beers, juices as well as a full restaurant and pastries.

We opted for a section of bite size pastries and a coke. A couple new riders for the section stopped to join us. It was nice having a social break with other riders.

The road continued into a nature reserve, Quebrada Del Cayafate, its a beautiful canyon with an actual river and beautiful red rock formations. 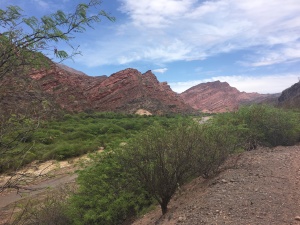 I am still amazed that I enjoy the desert now. The road was a slow upward grade but with the wind it felt like we were going downhill. We stopped several times for photos, each corner the views just kept getting better.

Our camp was at a former farm along the river. To our surprise, there was a restaurant on the property that sold empanadas and cold drinks. Of course we indulged. The camp was surrounded by mountains, and we had goat neighbors roaming around throughout the night.

Last night we slept with the fly open on the tent, it was refreshing have a comfortable breeze circulating throughout the night. We woke up to a beautiful morning, sun rising over the mountains and the temperature was mild. We started later than usual, 8 am for breakfast, since it was such a short day and we are heading into a rest day, our hotel rooms wouldn’t be ready until 1pm. 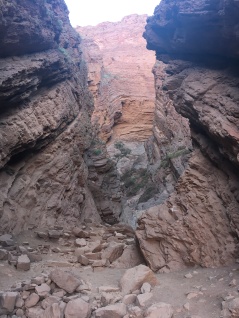 The ride continued down the same road through the canyon. We passed through beautiful rock formations and later some more vineyards.

Bruce and I stopped several times for pictures but I don’t think we were able to capture the beauty of the scenery. The road had some rollers and over all was an upward incline all day.

After lunch we only had 14k to our hotel. The road flattened out and when we were just a few kilometers from town the roads were lined with grape vines with mountains in the distant background, a beautiful scene to be welcomed into a town known for wines. Cafayate is a quaint town with ample shops and restaurants. After checking into our hotel and showering, we hit the plaza for food.

We enjoyed empanadas, beer, and ice cream before hitting a winery. We heard that Bodega de Esteca was the best in town, it was 2k from the hotel and the wines were not that great. We spent maybe 15 minutes in the winery, then had to wait about an hour to get a taxi back. The sun was way too hot to walk back.

Siestas are prevalent in Argentina. Restaurants and shops will close down around 3pm and not open until after 7pm. I think its great to give service workers a break, but when you are used to living by the sun, your ready for dinner at 6pm and to be asleep by 8pm.  In the meantime, a few ice cream shops were open and a cafe for beverages only.